The archives record a number of large tournaments held during each season in the 1920s including an event in  1925 where it is recorded that 116 bowlers were in town for the annual tournament (but the nature of the tournament is not specified).

It is possible that the reference was to a tournament between Cobourg  and the CPR Recreation Club as the club has a couple of photos taken of CPR events that appear to be different occasions. This photo is dated August 1925 and  is titled "Cobourg and West Toronto Clubs"


The club house was built in 1925 and this was probably the first photograph taken after it was built that year. Further information about the development of the club house can be found in the section below.

By 1936 membership had fallen to 35 members and funds were very low so it is surprising to find that in 1937 it was decided to build an addition to the club house at  a cost of $2,500.

In 1941 it was recorded that doubles play started. Up to that point play had still been singles or fours. There would be no further changes until 1957 when trebles were introduced in place of fours.

On September 4th 1982 the club celebrated its 75th anniversary with the first Anniversary Tournament (the tradition of holding an anniversary tournament continues to this day). The winning team was Gord King, Carol Knapper and Peggy Lascelle. 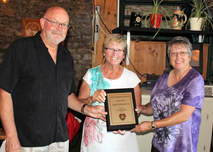 In 1990 Dorothy and Paul Allen formed the club’s junior section which has proved very successful and continues to this day.

The club celebrated its centenary in 2007 with a tournament, dinner and entertainment at the Legion. Also about  that time there were discussions with the Town about possibly moving the club from its Victoria Park location to the planned new Cobourg Community Centre. However, that came to nought and the club remains an integral part of Victoria Park and the waterfront area of Cobourg.

In 2017 the club celebrated 110 years in Victoria Park with the traditional anniversary tournament followed by a celebratory dinner at the Mill restaurant. Pictured are Past President, Steve Haslam, Vice President Carol Dewey and President Nan Hendren  with an OLBA plaque commemorating the occasion.

The Greens and the Grounds

When the club was founded there were four rinks and in 1909 another four rinks were added to the north of the existing rinks. It is thought that this forms the basis of the 8 rinks of  today’s south green. In September  1914 the Town council granted land to the East to square off the plot. Unlike the club house, which is owned by the club the land is leased from the Town.

By 2001 the light standards were declared dangerous and new lights were installed early in 2003. The total cost was  $29,835 and a Trillium grant was received of $25,000 towards the cost.  In 2002 the sprinkler system was replaced and a new control system installed at a cost of $6744.

In 2012 much of the greenskeeping machinery was replaced following a New Horizons for Seniors grant of $16,000. This allowed the club to purchase a second mower, a polisher/roller, a new Verticutter, a compressor and other minor pieces of equipment.

In 2018 the club received a grant under the Horizons for Seniors program which was used for new greens keeping equipment ( a multi purpose mower, ride on tractor and self propelled surrounds mower) as well as several sets of new lawn bowls.

At the end of the 2018 season a new equipment garage was built following successful fund raising by members and augmented by a $10,000 donation from the Rotary club of Cobourg.

Some Notable Members
​
There are many familiar and notable names that appear in club records and on the numerous trophies in the club house. Too many to mention here and apologies to the many who have made significant contributions to the club but are not mentioned.

Victor Foxhall is pictured here with Helen Cane after they had won the Ontario mixed pairs title in 1987.

Vic was an English singles champion in 1951 and he became a member at Cobourg in 1955. He held many positions in the club as well as at District and Provincial levels. He was President of the Ontario Lawn Bowling Association in 1974 and in 1975 he received a special achievement award from the Government of Ontario. Vic won 3 gold medals at the first Canada Summer Games and was successful in tournaments at provincial, district and club level.

Vic's son, Martin is also a Cobourg member and  has followed in his father’s footsteps and enjoyed success at all levels, most recently as a member of the Ontario Fours team which won silver at the 2017 Canadian National Championships in Victoria BC. 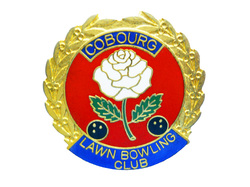 The Club Crest and Pin

In 1974 a proposal was made by the Ladies section that the club should have its own Pin. The Ladies President at that time was Jean Rutherford and she took on the task of designing the Pin. The centrepiece of the design is a white rose which was the flower of the Cobourg Centennial. In 1994 the then club secretary, Shirley Fraser, initiated the production of a club crest, based on the pin, which was available for members to purchase, either as an individual crest or directly sown on to shirts and jackets.

As part of the 110th anniversary celebrations it was decided that the logo should be updated to a more modern style. However the Executive Committee wanted to retain the traditional Cobourg white rose. After much discussion and refinement the new logo, as shown below,                                    was introduced in 2017.
Proudly powered by Weebly