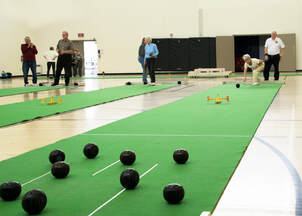 
It was at a meeting on October 13, 1998 at the prompting of Mrs Dorothy Allen, OLBA representative, when the Cobourg Lawn Bowling Club executive introduced the subject of starting up a club for Short Mat Bowling.  The game of Short Mat Bowls, a very popular indoor sport played in the UK, appeared to be the answer for us Canadians to keep active and fit during the winter months.  At present, 2021, the Cobourg Short Mat Club is active from October through to the end of April.

Short Mat Bowling by no means is restricted to the UK and Ireland but internationally thriving national associations also exist in Belgium, Sweden and Norway.  Although a variation of lawn bowls, Short Mat is relatively modern, its origins appear to be wrapped in a mystery of folk lore and dates back to about 1926 in Belfast.

Once the presentation was finished there was no hesitation with nineteen lawn bowlers signing up immediately, and a further 20 names on the ‘interested’ checklist.
​
Dorothy Allen, following up on a tip from John Schumann, wasted no time in arranging the use of the drill hall of the Hastings and Prince Edward Regiment.  A locker and storage room for the mats were also provided by the militia.  Three 30’ by 6’ old carpet bowls mats were donated by Dorothy Allen and John Schumann.  They were cut and spliced to make two 45’ regulation size carpets for Short Mat Bowling.  Dorothy also advised us that three more mats (tournament size) were available on loan from the Short Mat Association.  Reg Longman donated a dolly which Emil Lindt converted into a storage vehicle for the mats.  A committee was formed, and volunteers used their skills to build the fenders and equipment needed for playing the game.  Other volunteers stepped forward to fill the needed positions to look after the financials, insurance, organizational needs, coaching and liaison with the Lawn Bowling Club who provided name tags and ‘Jacks’ on loan until we were able to purchase the correct heavier ones later in the season.

The original 19 members grew throughout the season to 47.  The highlight of our first season was hosting the 1999 Ontario Short Mat Bowling Championships on March 6th and 7th.  With the help of the Niagara Falls Bowling Club who lent us four additional mats we were able to accommodate eight mats of pairs.  Bowlers belonging to clubs from Chatham, Bradford, Niagara Falls, Burlington, Oshawa, Brampton, and Cobourg entered the competition.  Fred Stringer (Tournament Chair), Ross Adams (Drawmaster) and Peter Kurita (Umpire) presented the winning teams with a handsome silver trophy and prize money.  Participants enjoyed dinner at the Cobourg Yacht Club thanks to Myrtle Wardman and Dorothy Allen.  The Cobourg Town Crier presented gifts and souvenirs.

In 1999 with the expert guidance of John Simpson we were successful in obtaining a Trillium Foundation Grant totalling $8,000.00 to be paid in two installments.  We initially purchased four new mats from Verdi Sports Limited, UK which we received in January 2000.  Two more mats arrived in September which enabled the 2000/2001 season to increase in membership to over 70.

Eventually the club raised enough money to purchase a seventh mat in February 2003.  Typical cost of a single mat including shipment from England, customs, and trucking charges amounted to approximately $2,000 Canadian.

We endeavoured to hold in-club tournaments once a month, often with a theme such as ‘Autumn Leaves’, ‘Snowflake’, ‘President’s Tourney, ‘Skip-A-Long Loonie’ and ‘the Springfest Tournament’ which has been an annual competition with the Brighton Short Mat Club for many years.  Another annual tournament was named the “John Schumann Tournament and Pizza Party” in honour of John who bowled well into his 80s.
Most of the in-club tournaments included potluck lunches or perhaps reservations for dinner in a local restaurant afterwards.  A record of the winning scores were kept and an AWARD printed and posted on the club bulletin board each month for all to see.

Every Christmas would be celebrated with specially planned events to include the members and their spouse or guest.  Arrangements for dinner, entertainment, dancing, a gift table and of course the special guests – Mr and Mrs Clause.  Often there would be games, puzzles, or something unexpected distributed to the gang.  One year each person was handed a ‘santa hat’ and was told that they must wear it all evening or possibly be asked to perform a silly dance or recite a poem or something.  No one took off their hat that evening.

We also organized ‘end of season’ parties.  Rented a hall, caterer, entertainment, square dancing lessons.  And did we like cake?  We made a cake for JOE’s 80th, we made cakes for the Schumann Tournaments, and for the invited Brighton Short Mat Club.  If something needed to be celebrated, then we made a cake.

Whereas we always enjoyed our time at the Armories and the special attention of the Sergeant who was always more than happy to help us, the drill hall had no natural light.   We didn’t mind the challenge of the uneven concrete floor, or attempting to avoid running into the columns and walls with a stray bowl.  The somewhat tight spacing of the carpets was quite a challenge as well and so we felt it was time to consider a change.  With construction completed in 2007 of the new Cobourg Community Centre on D’Arcy Street, we made inquiries of the cost of renting a gym, year-round storage space for our carpets and equipment in a secure location, and an available meeting room.  Negotiations were made and costs agreed upon, the days and time periods scheduled, and we have been enjoying the sport of Short Mat Bowling at the CCC ever since.  But unfortunately, no cake, pizza or drinks are allowed in the gym.

At the start of the 2017 short mat bowling season the club joined the newly formed Canadian Short Mat Bowling Association (CSMBA).  This meant that Cobourg bowlers were eligible to compete in the first National Championships to be held at the JJ Mat Club in Etobicoke in November 2017.  The Championship was also a qualifier for the 2018 World Championships in Stromstad, Sweden.

Cobourg had six members competing - Martin Foxhall, Ralph Hewitt, Dave Jones, Nancy Fargo, Louisa Arthur and Bill Arthur.  Gold and Silver winners in each event (singles, pairs, triples, and fours) qualified for the twenty member Canadian team.  Martin Foxhall won gold in the Pairs and silver in the Singles but was unable to take his place on the Canadian team due to other commitments.

In the Nationals a player could enter more than one discipline in the week-long event but not in the Worlds.  Qualifiers could only play in one discipline and because of that ruling the fourth place Triples team of Bill Arthur, Louisa Arthur and Nancy Fargo were selected since members of the Triples teams in silver and bronze positions had already qualified in other disciplines.  Additionally, Ralph Hewitt got a wild card selection based on his performance and played in the Pairs.

In March 2018, the Cobourg bowlers made their way to Sweden for the three-day event.
​
Short mat bowling is a far more widespread sport in Europe than in Canada.  The Europeans have regular tour events whereas in Canada it is a sport played primarily for social reasons.  The Canadians knew they would be very much the underdogs but, as in any sport, they were proud to be wearing their Canada shirts and representing their country.  It is a moment they will always remember marching into the arena for the opening ceremony.  There were short mat bowlers from ten other countries - England, Wales, Ireland, Sweden, Norway, Belgium, Italy, India, Denmark and Germany.

The Championships were held over three days and each team played a six-game round robin.  Despite some valiant performances the Canadian team recorded few victories, and the Cobourg members did not win any of their games.  Unfortunately and in defence of the Arthur/Fargo triples team they were badly hit by sickness.  Louisa Arthur had to pull out of the team on the first day whilst Bill was also recovering from sickness.  A spare was drafted into the team for Day 1.  Louisa was able to play on Day 2 but not for the final game on Day 3 by which time Nancy Fargo had caught whatever was going round.  Despite the problems the team enjoyed the experience and learnt some valuable lessons which would serve them well for the future.  And it is fair to say, had some enjoyable social events and made new friends.

In November 2018, the second Canadian National Championships were held again at the JJ Mat Club in Etobicoke.  Since the World Championships are only held every two years the 2018 National Championships were not a qualifier although performances would result in ranking points for the 2020 Worlds.
Martin Foxhall was once again prominent winning two gold medals and one silver.  Bill and Louisa Arthur were also competing in Triples again but with Mike Place on this occasion and they won the gold medal defeating the top two seeds on the way.

After two National Championships at the JJ Mat Club, CSMBA was looking for a new venue for the 2019 Championship competitions and approached the Cobourg club with a request to host the Championship games in November.  After a lot of organization by club members the necessary arrangements were made to ensure the availability of a gym and adjoining lunchroom at the Cobourg Community Centre for the six-day event.  Club volunteers took turns to serve tea, coffee, beverages and food and snacks to the bowlers between games during the week.  Much gratitude to sponsors and donators for over $2,800.00 raised to help cover expenses.

Holding the event in Cobourg was a great success with competitors from Brampton, Burlington, Cobourg, Kingston, Niagara Falls, Ottawa, and Toronto complimenting the facilities and the warm welcome of the Cobourg club members.  Holding it in Cobourg also meant more entries from Cobourg members who enjoyed the opportunity to compete against some excellent bowlers without having to travel out of town.

No disrespect is meant to the Cobourg Pairs team of Mike Place and John MacKenzie, but they were the big surprise of the Championships taking gold in the Pairs and automatically qualifying for the World 2020 Championships in Belgium.  They even surprised themselves!

As was the case in previous years there were some players who were multiple winners and so selection came down to performances in 2019 and 2018.  As a result (and not because he was a CSMBA Director and selector) Bill Arthur was selected to play singles and Louisa Arthur as a member of a triples team.

​The 2022 CSMBA championships are being held in Cobourg in November and this will also be a qualifier for the world championships in Aberdeen, Scotland in March 2023.

As a footnote to this article, 24 years after that initial meeting on October 13, 1998, some of the members who helped establish the club still enjoy the camaraderie and friendly competition of Short Mat Bowling.  To name a few - Malcolm and Myrtle Wardman, Basil and Jean Fox, Ross Adams, Marilyn McMillan, Martin Foxhall, Dianne Lauder, and Donna Longman.

And this article would be incomplete without mentioning Harry Knapper, a long-time member of the Cobourg Lawn Bowling Club for over 50 years, a Cobourg Short Mat Bowling Club member of 20 years and still active in both sports at the young age of ‘in his late 80s’.